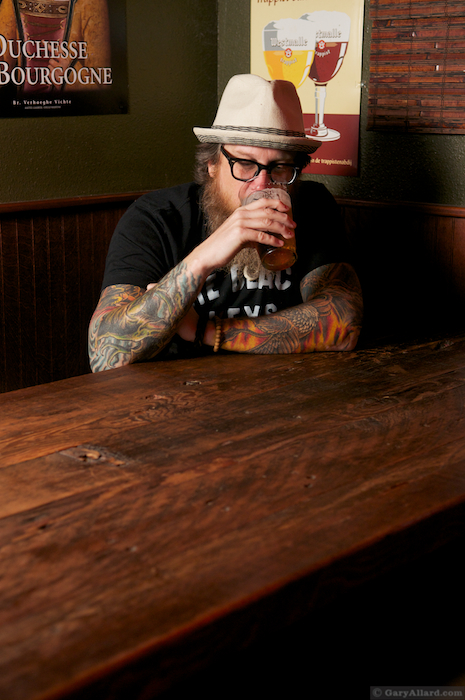 I meet Blair on a sunny Friday afternoon – the day after St. Patrick’s Day – in front of Hamilton’s Tavern, the South Park bar he opened in 2006. It’s a busy day for him and his crew. They blasted through no less than 8 kegs of Guinness  between two bars in one night and were scrambling to replace them.

We step through the door of Hamilton’s and the midday sun dissolves into warm dim light, the corner jukebox jangles out The Stone’s “Aint too Proud to Beg” and suddenly I feel like this is the best place to be – the only place to be – on this sunny afternoon. The bar is buzzing with young hipsters, middle-aged couples, post-work colleagues, and seasoned barflies. A diverse crowd to say the least, all contentedly coexisting under the giant chalkboard listing the 28 taps of the day.

With the causal, comfy vibe, the chalkboard, the perfect jukebox, and the incredible selection of beer, Blair has crafted  a bar that embodies all of the best alehouses, taverns and pubs he’s been to around the world. And the neighborhood obviously agrees.

The key to Blair’s success seems to be offering up just what the area needs, even if the neighborhood doesn’t know it yet. Small Bar in University Heights opened in late 2009 and quickly gained a dedicated clientele. It’s part gastropub, part alehouse, with a top-notch cocktail menu to boot. Simple, well crafted food and drink that was exactly what Park Blvd. needed. Eleven, which opened in Normal Heights last year is a rock bar and live music venue. Blair collaborated with Hamilton’s/Small Bar partner Dennis Borlek  and brought in Louis Mello (of Liar’s Club fame) to run the joint. The result is the perfect rock and roll bar with a killer sound system and a savvy beer list.

Blair’s passion for finding good beer and good places to get it are infectious and this enthusiasm spills from each of his venues. He’s also a certified Cicerone™ and accomplished home brewer and more than happy to pass along the knowledge and insight that comes with it. Blair wants us all to live better lives and if that involves some great beer, good food and killer music, he can give you a few suggestions on where to start.

Passion for beer runs deep at Stone Brewing. It’s immediately evident as Greg Koch and Steve Wagner sit down with their glasses and survey the pour. It’s not quite right. There are some tiny bubbles clinging to the side. Greg gets up and returns to the tap with a new glass. This one is better. Dark, thick headed, picturesque. Deliciously photogenic. Now we’re ready for our close up…

Steve and Greg founded Stone Brewing in 1996 and have been making highly respected craft beer since. With the opening of the Stone Brewing World Bistro & Gardens in 2006 they upped the ante and created a craft-beer Shangri-La. BeerAdvocate Magazine named them the “All-Time Top Brewery on Planet Earth” proving that Steve the Brewmaster and Greg the Bizmaster have got a good thing going. There is even talk of a possible European-based brewery and the opening of a new spot in the South Park area of San Diego.

After we shot a few frames, shared a beer and had a bite (I highly recommend Meatless Monday in the Bistro) I browsed the shop for some new releases. The Lukcy Basartd Ale [sic] and Cali-Belgique IPA are my top picks at the moment with Ruination IPA and Vertical Epic Ale rounding it out.

If you want some first-hand knowledge, Stone offers daily tours and tastings. Get in there!